The process of forging Barebones cast iron is slow and thoughtful. Each piece is created with meticulous artistry and craftsmanship, and then pre-seasoned with natural, organic oils before being shipped. By leaving the surface ever so raw and rugged, the oils are better absorbed, providing an exceptional cooking surface from the very first time. Unlike other cast iron, it isn’t necessary to wash or scrub Barebones cast iron before use: we don’t use any resins to cover imperfections.

For most cast iron, it is important to season your piece before cooking or baking. Though all Barebones cast iron comes pre-seasoned and ready to use, you may find that your Barebones cast iron needs to be reseasoned over time. Seasoning is a common practice that creates a smoother, non-stick cooking surface. Seasoning can help if you use your cast iron in less than ideal conditions (e.g. over an open flame and thrown in the back of your camper), accidentally left water in it to naturally dry, cooked with super high heat, or you just want to give it a good reset. 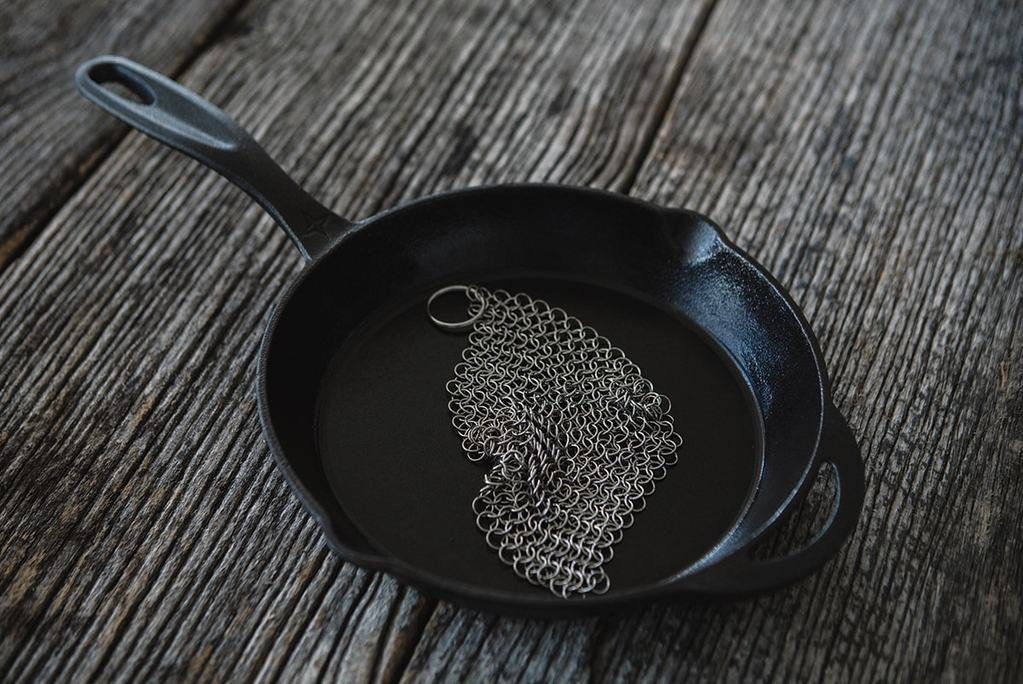 Why Do You Season a Cast Iron?

Cast iron is made from reducing large pieces of iron in a blast furnace. Cast Iron skillets and dutch ovens are typically a mixture of iron and carbon when finished. Cast iron naturally has a rough, bumpy, porous surface when first created. When heat is added to the mixture, these bumps and pores expand on the surface, which can create a less than ideal cooking experience. Seasoning helps to create a smooth cooking surface by using cooking oil to fill in the uneven aspects. Think of a lake-bed: often the ground is very uneven underneath, but the water on top looks completely flat and smooth.

Over time, as you continue to cook with your cast iron, the bumpy surface becomes completely covered by layers of fully cooked oils that bond to the surface (see the science below). This is a well seasoned cast iron.

Over time the surface of cast iron gets smoother and smoother. Why? This is due to a process called Polymerization. As you cook, the long chains of fat molecules in cooking oils break down on the surface and turn into an entirely new chemical compound. This new chemical compound is actually a natural biopolymer that creates an extremely smooth, non-stick surface in your skillet or dutch oven. 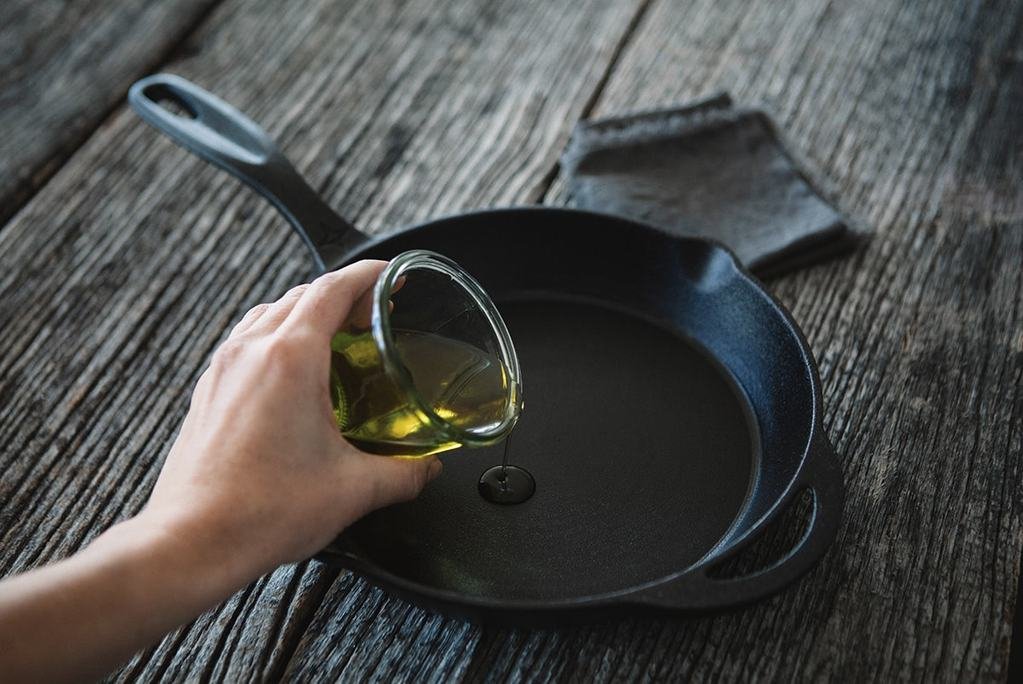 How To Season Cast Iron

The best way to keep a cast iron seasoned and happy is to cook with it. Make it your “go-to” skillet and create a routine of utilizing it whenever possible. Every time you heat oil in your cast iron, polymerization occurs, adding a new, thin layer of non-stick surface to your skillet or dutch oven. These layers build and build until you have an incredibly smooth cast iron. This makes cooking a dream!

Our team has given many different techniques a try and found the steps below to make the most sense from both a practical and effective standpoint: no messy dripping oil and successful, long term results.

Ideal seasoning temperatures allow for polymerization to occur (oil bonding with iron) but not for the oil to smoke and ultimately turn into burnt carbon. A slow and steady cook time allows for the cast iron to heat evenly, and the oil to heat with it. Note: every stove is different. Watch your cast iron for smoke and turn down the oven if this occurs. 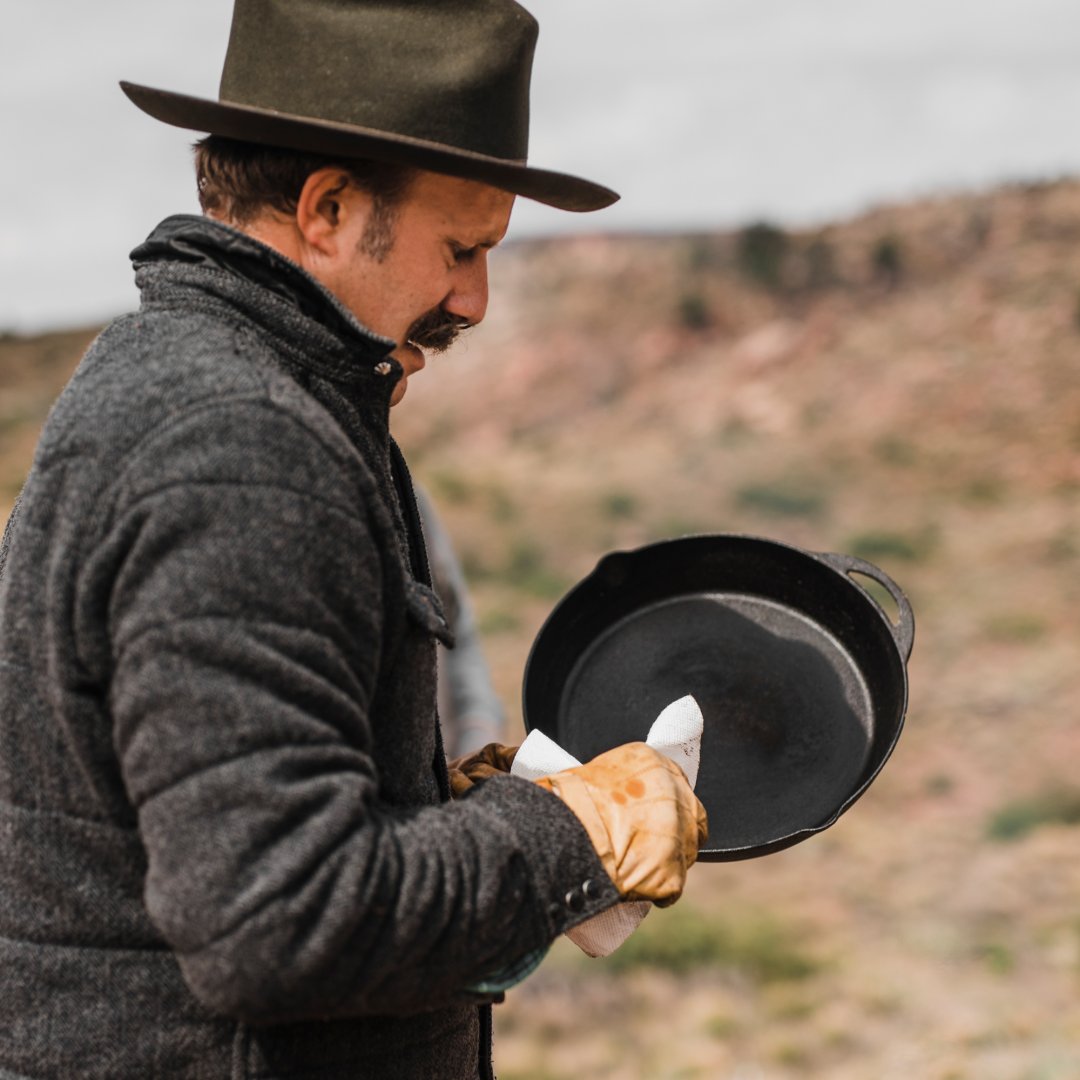 How To Clean Cast Iron

Using cast iron helps to reduce water use: most days you can wipe excess oil and food bits out of your skillet or dutch oven with a paper towel or dedicated rag. (Oils are meant to keep at room temperature; A small amount in your skillet or dutch oven will not cause mold or other issues.) If you need a deeper clean or wish to remove stuck-on foods, follow the directions below:

Why To Avoid Soap When Cleaning Cast Iron

Contrary to popular belief, occasionally using soap in your cast iron won’t ruin it, but it’s best to avoid it all together if you can. Over time soap can remove the oils that help create a smooth cooking surface, and soap actually does not clean as well as using a natural Salt Based Scrub. If you do decide to use soap, make sure to re-oil your cast iron and completely dry it. Leaving water droplets to naturally dry will cause rust spots to appear on the surface of the cast iron. Regardless of how you clean, we recommend putting the cast iron back on the stove over low heat for a few minutes until it dries.

As we’ve learned from seasoning, cast iron does have a porous surface and can occasionally retain odors more than stainless steel. We recommend steering clear of very smelly foods like fish if you are sensitive to smells. If you find that your cast iron is retaining odors, try a Cast Iron Scrub. Make sure to use a Cleaning Mesh to remove stuck-on foods that could smell over time. 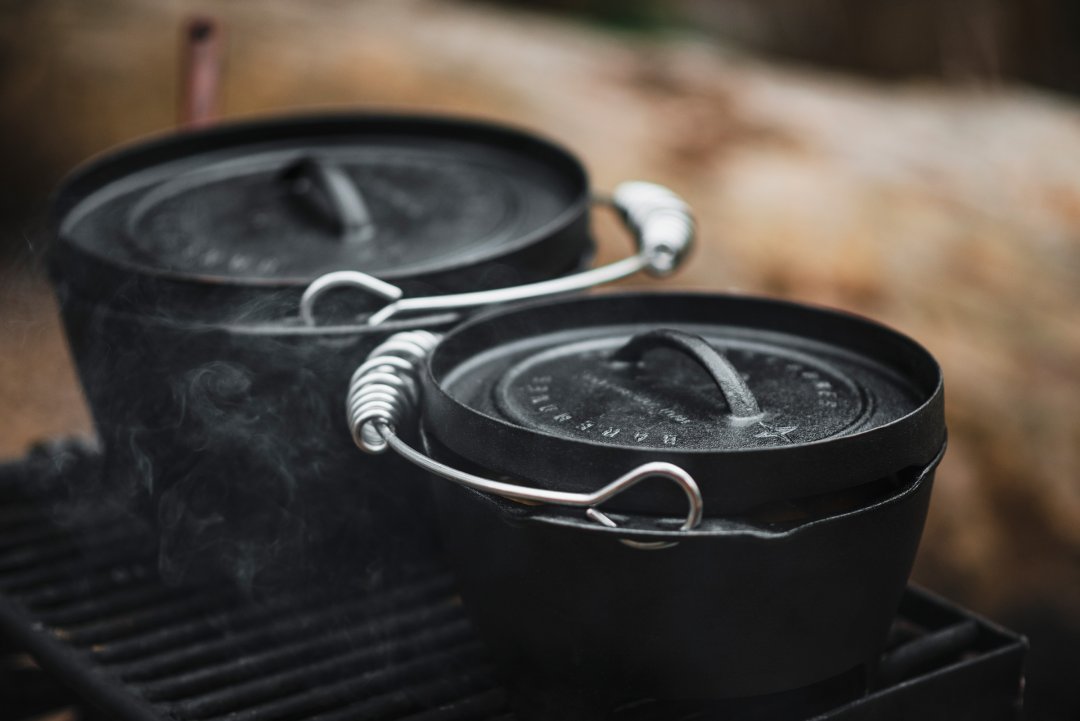 But, Is Cast Iron Worth the Extra Cleaning Steps?

Shop All Cast Iron and Grills >>