Barebones offers two types of cast iron pans: our classic Cast Iron Skillet and the Polished All-In-One Cast Iron Skillet. Both skillets are of heirloom quality and are designed for use in a variety of cooking situations, including in the kitchen and over an open fire. But which is the best cast iron skillet for you?

We develop our cast iron products using a proprietary blend of cast iron and steel. By adding an increased portion of steel, each piece is better suited to handle rapid temperature change without the cracking or breaking that can occur in more iron-dense products. This formulation also allows our skillets to be 15% lighter than similar cast iron products, offering smoother handling and a more agile cooking experience. With sustainability in mind, our cast iron is free of resin-based sealants. The polished Cast Iron Skillet is seasoned with natural, organic sunflower oil, and the Classic Skillet is seasoned with natural, organic vegetable oils.

If you have a cast iron dutch oven or skillet that has been passed down from your grandparents (or great-grandparents!), it likely has a very smooth cooking surface. Contrary to popular belief, cast iron pans came polished as standard practice in the 19th and early 20th centuries. As cast iron became less expensive and mass-produced, an unpolished, rough interior became commonplace. Dutch ovens and skillets are often purchased this way today. Our two pan types give you the option of a vintage polished interior or a more rugged, porous interior. Both options are non-stick and can cook a variety of recipes without fail.

With a nod towards Japanese cookware and design, the All-In-One Skillet features a square, flat top, and rounded bottom. Copper accents and a flat, square handle give a premium look and feel. In this deluxe version, we included a beautiful, polished dutch oven-style lid that acts as a second cooking surface on hot coals or fire. A newly designed extended handle makes quick work of easily and safely handling any dish over an open fire. The added hole for hanging and dual pour spouts offer real-world use from the kitchen to camp and everywhere in between. 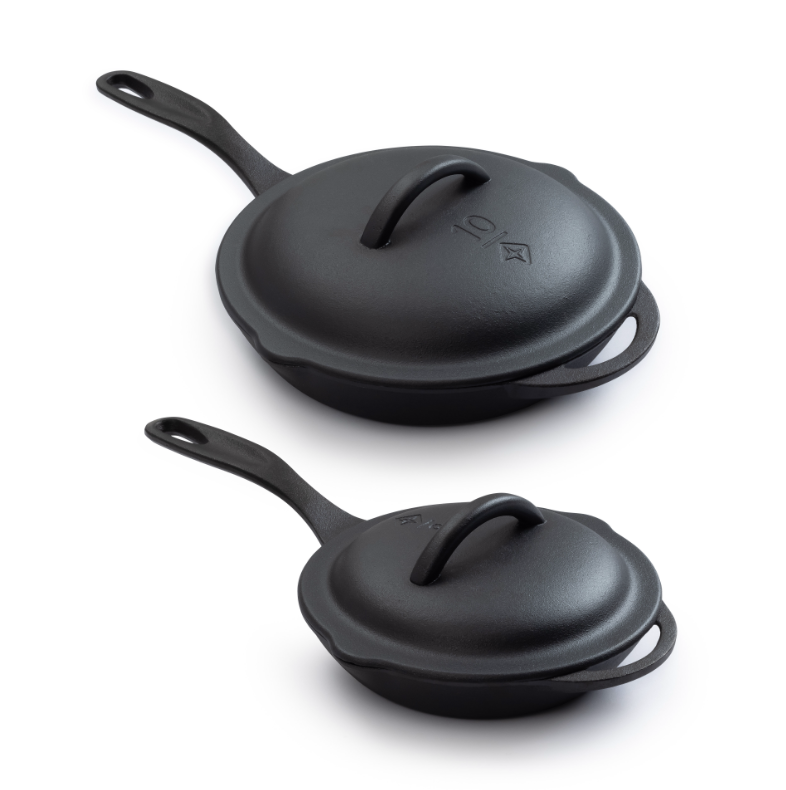 This skillet is your go-to, classic, non-stick pan, complete with a comfortable standard grip handle, an added hole for hanging, dual pour spouts, and iconic heat dispensing technology. The interior of the pan is more rugged than the polished alternative, allowing the seasoning to stick easier. (The interior will smooth over time as polymerization naturally occurs.) The Classic Skillet is timeless and rugged with rounded features similar to lodge cast iron skillets or other skillets you may have come across in kitchens across America. This classic non-stick skillet is the pan you take everywhere and use for everything.