15% Off the Backyard Collection with code SUMMER15    Shop Now There are many benefits to pruning plants while they’re still dormant during late winter and early spring. First, it gives you a great excuse to head into the garden on a sunny day when it’s too early to tackle other spring garden chores. Dormant-season pruning also gives you the best view of the plant’s form and structure, which is a benefit when you’re shaping trees and shrubs. The general purpose of pruning in spring is to first clear out dead plant material so the plant can grow uninhibited, and second to shape unruly stems and branches.

The process of pruning creates a wound that the plant must seal to protect itself from infection. Plants do this by producing a sugary or resinous substance known as sap. During the dormant season the plant's sugary sap is located mostly in its root system. As the plant begins to wake up, the sugars travel up the body and into their limbs. By pruning just before growth begins, you pave the way for fast sealing during their rapid growth spurt in springtime. Pruning when temperatures are cool also reduces the stress a plant experiences. Another advantage of late-winter and early-spring pruning is that pruned plants begin the growing season with a root system that is loaded with stored food from the dormant season. Removing the dead plant material facilitates new growth, unencumbered by dead branches or stems.

-
When & How to Prune
Flowering Shrubs

In contrast, you’ll want to prune shrubs that flower during summertime, such as rose of sharon, crape myrtle, hibiscus, and hydrangea in late-winter or early-spring when they begin to show signs of new growth. Place pruning cuts to shape the plant first, then thin the interior of the shrub if it is overly crowded with branches. This is especially beneficial for plants in humid climates because it increases air flow between branches and stems, mitigating the growth of mold and mildew. In cold winter climates, it’s best to wait to prune summer-blooming shrubs until the danger of frost has passed.

-
When & How to Prune
Shrub Roses 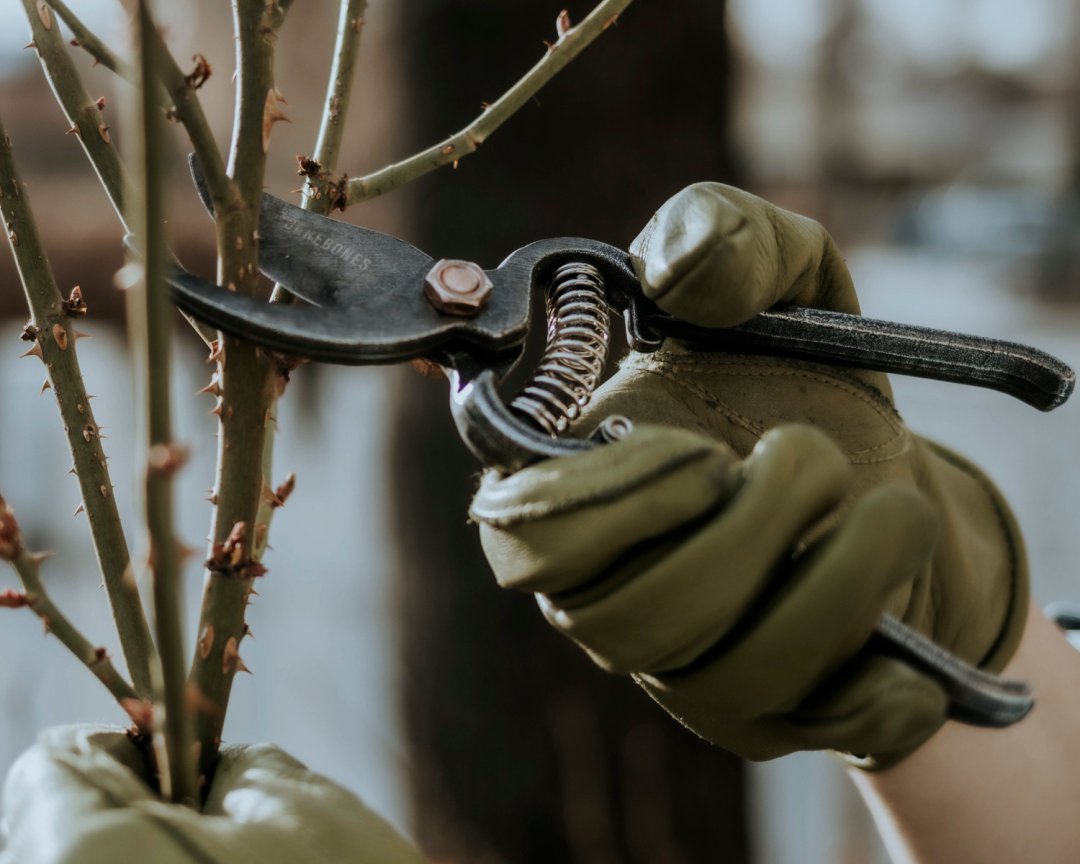 Shrub roses are an exception to this general rule. Prune shrub roses while plants are still dormant in late winter, or as new growth emerges in early spring if you live in a cold climate. Make the cuts to shape the plant and remove winter-damaged stems. For climbing roses, only remove winter-damaged growth in late winter or early spring. Because of the woody-tissued branches and stems, shrubs should be pruned with sharp pruning shears or loppers.

-
When & How to Prune
Perennial Herbs

Summer blooming herbs, such as spearmint, chives, comfrey, echinacea, or yarrow, need to be cut near to the ground and should be pruned in two stages. Typically it’s best to trim these types of plants down in early autumn, but springtime pruning is okay too. First, reduce the height of the shrub in early spring but don’t cut stems to their final size until frost is out of the forecast. Once your final average frost date has passed, then it’s time to prune perennial shrubs and herbs to their final size.

For woody-tissued herbs such as sage, lavender, oregano and thyme, avoid cutting the woody tissue in early spring because it can leave the plant exposed to frost or cold damage. Instead, wait to prune them until late spring or early summer when green tissue forms on the plant. After perennial herbs flower, you’ll want to give them a light pruning once again, just to remove the spent flowers. This will keep them healthy and flowering until the end of the growing season. Woody-tissued herbs are best pruned with shears, while green-tissued herbs and annual herbs that have fine stems should be pruned with sharp scissors.

-
When & How to Prune
Vines

Shape vines that flower in summertime while they’re still dormant in late winter and early spring. This group includes grapes, trumpet vine, passionflower, honeysuckle and bittersweet, along with clematis and vines that bloom on new growth. Vines are best pruned using sharp pruning shears, or the Japanese Nata Tool.

-
When & How to Prune
Trees 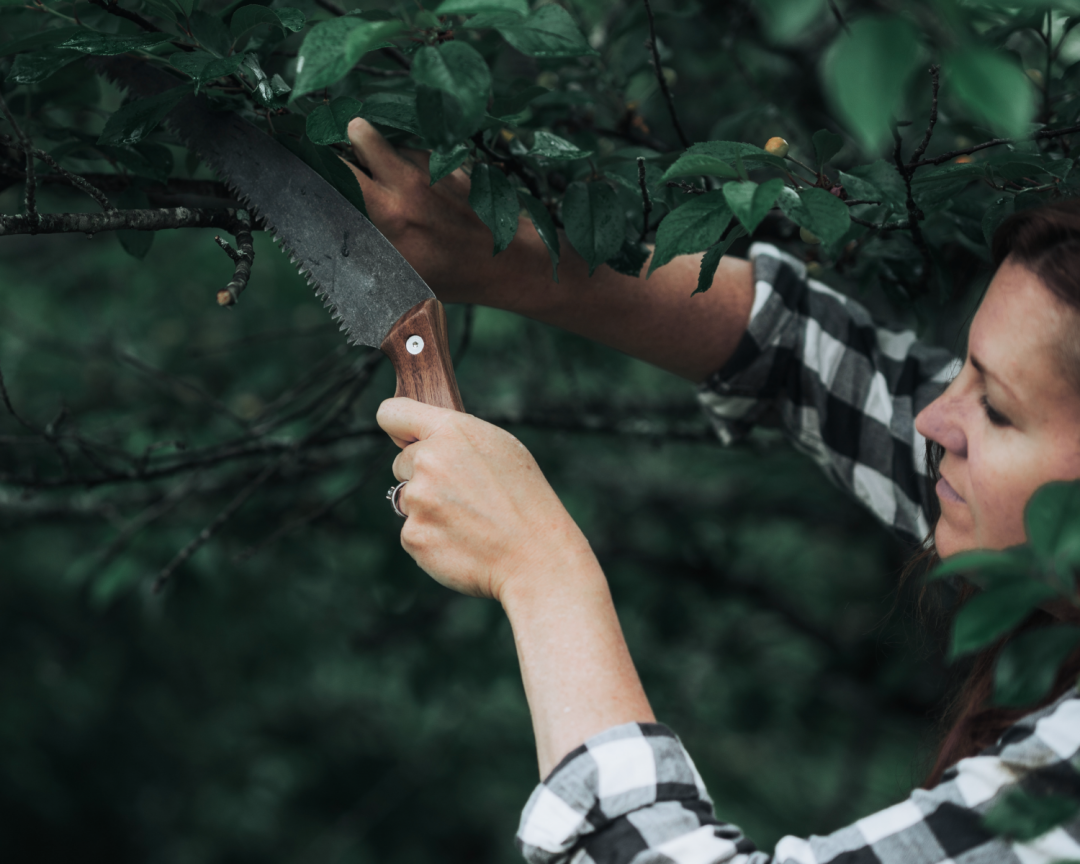 A general rule of thumb is to prune trees in late winter when branches are just beginning to bud and wake up from their winter dormancy. Start your late-winter pruning with evergreen trees that have needles, like pine, juniper, and yew. Then, prune broadleaf evergreens grown for their foliage, such as boxwood and hollies. For trees, focus on fixing the plant shape, removing wayward branches that begin to grow downward, and thinning out dead branches.

Deciduous trees benefit from pruning just before they leaf out in spring. With early spring bloomers like redbud and dogwood, postpone pruning until after their flowers fade. Birch, walnut and maple bleed sap after pruning. This usually doesn’t harm the tree, but pruning in fall or early winter, before sap starts flowing, can reduce bleeding. Some trees, like oaks, crab apples and elms, have strict pruning windows during winter to avoid giving pests and diseases access to fresh cuts. Branches and stems that are the size of a nickel or smaller can be pruned with pruning shears and loppers, while branches thicker than a nickel are best pruned using a hand saw.

Brianne Dela Cruz is a master gardener, wild forager, campfire foodie, and acclaimed writer and photographer. From her home in Salt Lake City, she teaches online gardening and foraging courses for modern folks and budding naturalists as well as hosts seasonal community gatherings. Brianne's blog and online school, Gather & Grow, is a community of folks exploring the intersection between nature and personal growth by discovering ways to slow down and nourish themselves with nature.

How to Grow a Patio Herb Garden